I have built a self-balancing robot, and here I want to post some notes regarding problems that I encountered. It was (as usual) more difficult than I anticipated, but I guess every hacker know this feeling. 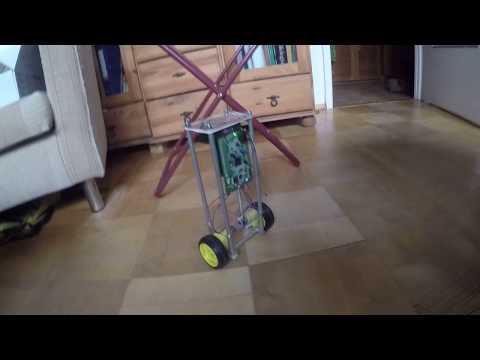 The frame is made of 8mm aluminium pipes, 2 sheets of 2mm solid transparent polycarbonate, and aluminium angle bars. The pieces are screwed together with threaded rods and self-locking nuts. Making the frame was the easiest part, so I won’t write much about it. 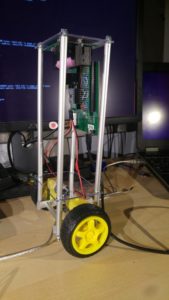 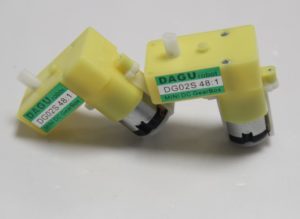 Motors are labeled “Dagu DG02S 48:1”, and I am disappointed, because they have very low torque at low RPM, and are of a low quality I think (their low price also suggests that). The consequences are, that they are unable to move my robot gently and precisely, but instead, they start all of a sudden with a couple of RPMs. At very low PWM duty cycle they are unable to move wheels at all, even with no load. The lowest RPM I can get out of them is probably a couple of RPMs, which sounds OK, but I think, that many of my problems arise from them being unable to gently move the wheels a few millimeters forth and back. Such a gentle movement is in my opinion crucial for steady (nearly stationary) operation, that you have on certain YouTube videos. So next tests (if there will be any) will be performed with steppers or geared brushless motors. Oh, and there are no encoders either.

If motors are the muscles, electronics are the brain. The mainboard is a STM32F4-DISCO and is connected to the battery via custom per-boards with connectors. On top of the robot, there is a single 16850 Samsung cell paired with cheap LiPo charger, and a switch. I chose it because it is a lot cheaper per mAh than those silverish ones. The battery sits inside a holder ordered on AliExpress. As of accelerometer and gyroscope, the super popular MPU 6050 does the job (also AliExpress). Motors are driven by Pololu DRV8835, and last but not least nRF24L01+ is used for connectivity with the robot, which is crucial to tune PID controller without dangling cables which would degrade stability, and make the center of mass unstable. Like shooting to a moving target.

Oh, and I wanted to control the robot using cheap CX-10 remote, but It failed. I based my code on deviation and other’s work, but after many hours I gave up. Then I’ve got Syma X5HW for Christmas, and with it’s remote I finally had success (after the first try, like 10 minutes of coding, not everyday something like this happens. But of course I only had to modify parameters for my CX-10 code). At first, I confused the binding channel number (I set 0 instead of 8), and I was still able to receive data, but only from approx 5 cm apart. Then after setting it correctly to channel 8 range increased dramatically.

I’ll try to force myself to get into detail on the topics above, as I only scratched the surface.